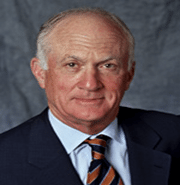 Chuck D. Klein served as senior financial advisor to the William Rosenwald family since 1978 to 2002. Prior thereto, Mr. Klein was an Institutional Investor all-star analyst, working for Bear Stearns from 1971 to 1974 and for Lehman Brothers from 1974 to 1978. Mr. Klein is a member of the New York State Bar Association and the New York Society of Security Analysts, and he serves on the boards of Sterling American Property, series of funds and successor partnerships, Ametek Inc. (NYSE), and various non-profit organizations, including the Population Council. Mr. Klein received a BA degree from Bard College and an LLB degree from New York University School of Law.